“The growing good of the world is partly dependent on unhistoric acts; and that things are not so ill with you and me as they might have been, is half owing to the number who lived faithfully a hidden life, and rest in unvisited tombs.”
--George Eliot 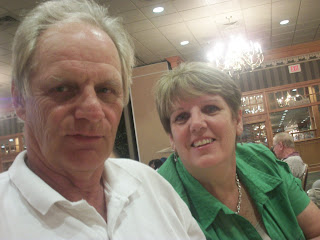 First, I wanted to say that I’m so glad that I didn’t wait until after his death to say these things to and about Jim (don’t let that happen to you!). I often told him how loved, admired, and appreciated he was, and just as often he seemed somewhat embarrassed by it (but never as much as when I awkwardly hugged him). I even called him “Dad” since he’s been my only living father for the last 20 years.

On a long flight to Africa a few months ago I thought I was just killing time by watching the three-hour movie A Hidden Life, but I ended up being deeply moved by it (and also loved how almost every frame looks like a painting). It’s a true story about a conscientious objector in Austria during World War II who, as an “unsung hero,” embodied the quote from George Eliot above. After the movie was over and that quote graced the screen at the end, I thought of Jim Hallman.

More importantly, my father-in-law embodied this quote from Scripture: “Make it your ambition to lead a quiet life and attend to your own business and work with your hands” (1 Thessalonians 4:11).

Jim’s work ethic was legendary among those who knew him, all the way up until he could not physically work anymore. He was also known for his quiet demeanor, except when an opportunity arose to talk about his baseball career. But actually, though he would discuss sports to get a laugh or make conversation, you could tell that his favorite topic was Jesus and the Scriptures. He listened regularly to Bible teaching on the radio and loved to share about what he had heard.

I don’t want to make him out to be a saint (in the Catholic sense), as if he was perfect. I remember him crying with regret a number of times, several of which were because he was physically unable to take care of our property anymore (okay, he was a saint). But, seriously, I remember him crying one time after his health problems began, wondering if it was because of sins he had committed. No, he was human, which is important for us to know because many of the stories you’ll hear about him make him seem superhuman, and rightly so.

Walking almost five miles to work when there was too much snow to drive, writing a letter to Jill every single week for over ten years while we lived in California and he in Pennsylvania, doing all the landscape work on our big property and others well into his 70s, and of course all those legendary baseball stories. He also had an amazing trust in God and the gospel (the fears mentioned above were just an understandable speed bump on his spiritual journey). He faced death with faith and thankfulness, which he expressed over and over, and some of his last words were a prayer in which he mentioned every member of his family by name and begged God that we would all be true believers in Christ.

Though Jim was a superhero in those ways and many others, there weren’t many people who knew about it. His multiplied good deeds will not go down in the history books and there won’t be large crowds of people at his gravesite. But the depth and quality of his influence on those of us who knew him and the exponential effect it will have on countless others through us will be obvious in eternity, which started for Jim recently when he heard these words: “Well done, thou good and faithful servant: thou hast been faithful over a few things, I will make thee ruler over many things: enter thou into the joy of thy Lord” (Matthew 25:31).