Favorite Songs (Coronavirus Edition) - Nobody But You by James Taylor

I've named this as one of my favorite songs (top two or three actually) ever since I was a kid--I grew up on James Taylor so I had to include one of his songs toward the top of my list. But over time and life experience it has taken on new meaning for me, which became even fuller recently when I remembered it and thought about it in light of one of the great lessons in the coronavirus crisis. I'll get to that below, but first let's talk about the song...

What I love about it musically: It's short, just the right length that leaves you wanting more. It's the perfect mix of sadness and hope in tone and feeling. It's catchy, and it saves the catchiest part for the end and only the end...if commercialization was the goal, the ending "chorus" would have been repeated over and over again. But Taylor, having aced the commercial thing already with the albums Sweet Baby James and Mud Slide Slim, wanted to do something more "concept" with this album (One Man Dog, still tied for my favorite with Dad Loves His Work) and he was aiming more for art than for sales. I love the guitar solo and that little roll on the drums at the end of it, and every other little thing about the song. It's perfect and so so smooooooth.

What I don't understand is why Taylor never plays it live (as far as I know...maybe someone can tell me differently). This doesn't make sense to me, especially since in his later years he's revisited so much of his obscure early stuff...even "Chili Dog" from this same album (you can't get any more obscure that that).

The lyrics are about everything letting you down except one person. Money, career, family, and even religion have now left this normal "Joe" empty and unsatisfied like Solomon in Ecclesiastes. Yes, some folks have been good to him in some ways. But only one person really understands, really cares, really is there for him in all the details of everyday life.

Is that one person God, or more specifically Jesus Christ? I don't know and can't find anything online that tells me, and of course Taylor could have been merely thinking of a lover or a friend. But it's not out of the question when you consider the fact that just two years earlier he wrote this in another favorite song of mine, "Fire and Rain":

Won't you look down upon me, Jesus
You've got to help me make a stand
You've just got to see me through another day
My body's aching and my time is at hand
And I won't make it any other way

So I like to think of "Nobody But You" as referring to Jesus. Only He really understands, really cares, and really is there for us in all the details of everyday life. And only He can provide the true satisfaction we need, especially in regard to the truth we need to know to have a good relationship with God and others (not to mention eternal life).

In contrast, if the coronavirus crisis has proven one thing, it's how much we as humans don't know. Consider these "lockdown rules" I saw on Facebook (sorry, I don't know who wrote them, but kudos to whoever did):


The Rules:
1. Basically, you can't leave the house for any reason, but if you have to, then you can.
2. Masks are useless, but maybe you have to wear one, it can save you, it is useless, but maybe it is mandatory as well.
3. Stores are closed, except those that are open.
4. You should not go to hospitals unless you have to go there. Same applies to doctors, you should only go there in case of emergency, provided you are not too sick.
5. This virus is deadly but still not too scary, except that sometimes it actually leads to a global disaster.
6. Gloves won't help, but they can still help.
7. Everyone needs to stay HOME, but it's important to GO OUT.
8. There is no shortage of groceries in the supermarket, but there are many things missing when you go there in the evening, but not in the morning. Sometimes.
9. The virus has no effect on children except those it affects.
10. Animals are not affected, but there is still a cat that tested positive in Belgium in February when no one had been tested, plus a few tigers here and there…
11. You will have many symptoms when you are sick, but you can also get sick without symptoms, have symptoms without being sick, or be contagious without having symptoms. Oh, my God.
12. In order not to get sick, you have to eat well and exercise, but eat whatever you have on hand and it's better not to go out, well, but no…
13. It's better to get some fresh air, but you get looked at very wrong when you get some fresh air, and most importantly, you don't go to parks or walk. But don’t sit down, except that you can do that now if you are old, but not for too long or if you are pregnant (but not too old).
14. You can't go to retirement homes, but you have to take care of the elderly and bring food and medication.
15. If you are sick, you can't go out, but you can go to the pharmacy.
16. You can get restaurant food delivered to the house, which may have been prepared by people who didn't wear masks or gloves. But you have to have your groceries decontaminated outside for 3 hours. Pizza too?
17. Every disturbing article or disturbing interview starts with " I don't want to trigger panic, but…"
18. You can't see your older mother or grandmother, but you can take a taxi and meet an older taxi driver.
19. You can walk around with a friend but not with your family if they don't live under the same roof.
20. You are safe if you maintain the appropriate social distance, but you can’t go out with friends or strangers at the safe social distance.
21. The virus remains active on different surfaces for two hours, no, four, no, six, no, we didn't say hours, maybe days? But it takes a damp environment. Oh no, not necessarily.
22. The virus stays in the air - well no, or yes, maybe, especially in a closed room, in one hour a sick person can infect ten, so if it falls, all our children were already infected at school before it was closed. But remember, if you stay at the recommended social distance, however in certain circumstances you should maintain a greater distance, which, studies show, the virus can travel further, maybe.
23. We count the number of deaths but we don't know how many people are infected as we have only tested so far those who were "almost dead" to find out if that's what they will die of…
24. We have no treatment, except that there may be one that apparently is not dangerous unless you take too much (which is the case with all medications). Orange man bad.
25. We should stay locked up until the virus disappears, but it will only disappear if we achieve collective immunity, so when it circulates… but we must no longer be locked up for that?
🤪 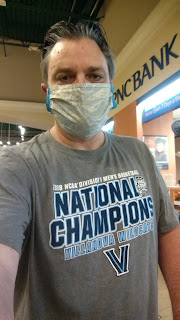 Posted by Dave Swavely at 4:59 AM No comments: