The real meaning of the rainbow 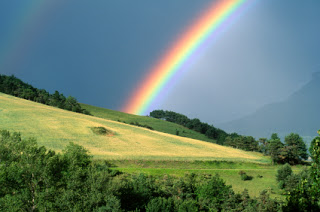 People think of various things when they see a rainbow, but I want to tell you what it really signifies. I chose both those words carefully and purposefully: "really" because regardless of how any movement or ideology might use the rainbow, or how any individual mind might construe it, that won't change the fact that God himself created it and communicated its meaning long ago. And I chose the word "signifies" because God actually calls it a sign of something important we all need to know.

Genesis 9:8-17 tells us that God made a covenant with Noah and all of his descendants, that he would never again destroy the earth by flood. He said, "I set my bow in the cloud, and it will be a sign of the covenant between me and the earth" (v. 13). Notice that God says it is "my" rainbow--it belongs to him, so he has the right to say what it means, and we have a responsibility to recognize and respect that pronouncement. This is like how people today expect others to honor the name they have chosen for their children, or perhaps chosen for themselves (if they change their name)--except our responsibility regarding the rainbow is much stronger because of Divine authority, coming from the one who created us and gives us everything good we have.

What does the rainbow really mean for us? When considered in the context and compared with other Scriptures, it clearly speaks of God's plan of redemption and forgiveness for people who deserve His judgment because of our sins. The reason God won't destroy the earth again by flood is not because the people who survived were good--in fact he clearly says the opposite (Gen. 8:21, 9:20-27). It's because there was a plan to save people from the eternal punishment we all deserve...as Romans 6:23 says, "The wages of sin is death [in the context a spiritual death], but the gift of God is eternal life through Jesus Christ our Lord."

So when you see a rainbow, God wants you to think about Jesus! How he was the best thing that ever happened to this planet, how he was the Son of God who fully revealed the divine nature to us, and how he "died for our sins according to the Scriptures...and rose on the third day" (1 Cor. 15:3-4). And because of the occasion for the inception of this sign, we can't eliminate the idea of the judgment we deserve for disobeying what we know to be right, or ignoring God's law by making up a morality of our own. That's what people were doing before they were destroyed by the flood, and that's what we're still doing today. And I'm not only talking about the kinds of sins that the rainbow has come to represent in our culture...heterosexual immorality is just as bad, and the "spiritual adultery" and "spiritual idolatry" that we all have in our hearts is even worse (James 4:3-10). Just loving and desiring other things more than Christ himself is enough to make us spiritual criminals deserving of judgment (see the first and last of the Ten Commandments).

"All of us like sheep have gone astray, each of us has turned to his own way"--wandering around blind and endangered on a God-made landscape like the one in the picture above. "But the Lord has caused the iniquity of us all to fall on him"--thankfully the rainbow reminds us that we have a Good Shepherd who has shown the "no greater love" of laying down his life for us! (Isa. 53:4-6, John 10:11-18)
Posted by Dave Swavely at 5:11 AM No comments: